AXA1665, a Novel Composition of Amino Acids, Restores the Dysregulated Amino Acid Profile, Lowers Ammonia, and Improves Body Composition and Function in Child–Pugh Class A and B Subjects 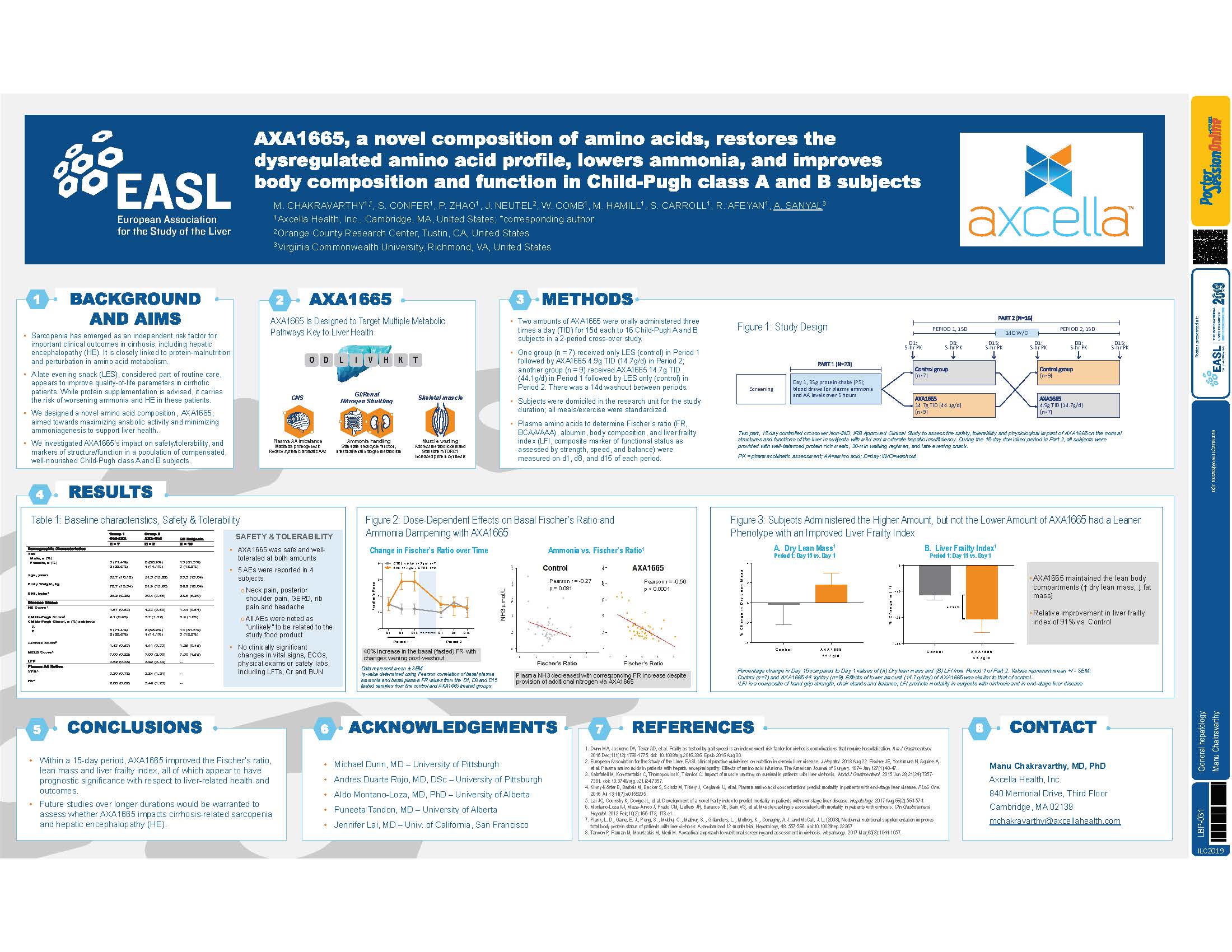 INTRODUCTION: Sarcopenia has emerged as an independent risk factor for important clinical outcomes in cirrhosis, including hepatic encephalopathy (HE). It is closely linked to protein-malnutrition and perturbation in amino acid metabolism. A late evening snack (LES), considered part of routine care, appears to improve quality-of-life parameters in cirrhotic patients. While protein supplementation is advised, it carries the risk of worsening ammonia and HE in these patients. We designed a novel amino acid composition, AXA1665, to maximize anabolic activity and minimize ammoniagenesis to support liver health. We investigated its impact on safety, and markers of structure and function in a population of compensated, well-nourished Child-Pugh class (CPC) A and B subjects.

METHOD: Two amounts of AXA1665 were orally administered three times a day (TID) for 15d each to 16 CPC A-B subjects in a 2-period cross-over study. One group (n = 7) received only LES (control) in Period 1 followed by AXA1665 4.9g TID (14.7g/d) in Period 2; another group (n = 9) received AXA1665 14.7g TID (44.1g/d) in Period 1 followed by LES only (control) in Period 2. There was a 14d washout between periods. Subjects were domiciled in the research unit for the study duration; all meals/exercise were standardized. Plasma amino acids, albumin, body composition, and liver frailty index (LFI, composite marker of functional status as assessed by strength, speed, and balance) were measured on d1, d8, and d15 of each period. A standardized 35g protein shake was provided 1 hour prior to the administration of AXA1665 or control on d1 and d15 of each period, and plasma ammonia levels were serially measured over the subsequent 5 hours to determine area under the curve (AUC0- 5h).

CONCLUSION: Within a 15d period, AXA1665 meaningfully improved the FR, lean mass and LFI, which are all surrogate markers of liver-related health and outcomes, while decreasing plasma ammonia. Future studies over longer durations are warranted to assess whether AXA1665 impacts cirrhosis related sarcopenia and HE.