AXA1665, a Defined Composition of Endogenous Metabolic Modulators, But Not Dietary Protein Improves the Dysregulated Amino Acid Metabolism and Ammonia Disposal in Child–Pugh A and B Subjects

American Association for the study of liver disease (AASLD) | November 8-12, 2019 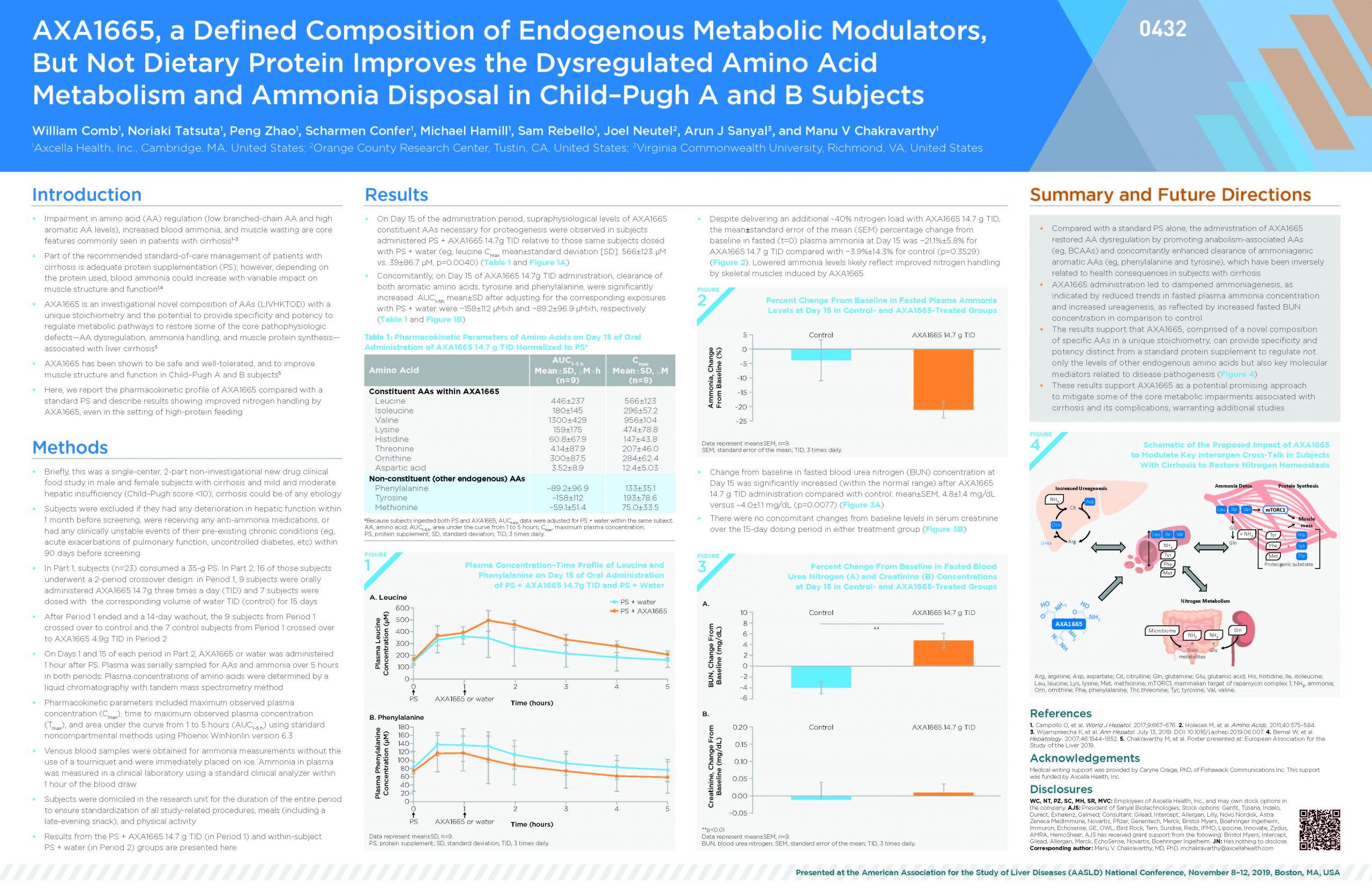 INTRODUCTION: Dysregulated nitrogen (N) handling due to impaired ureagenesis and amino acid (AA) metabolism results in a distinct plasma AA profile (eg ↓BCAA, ↑AAA) with hyperammonemia and muscle wasting in cirrhosis. While protein supplementation is standard‐of‐care for cirrhotic patients, it carries the risk of hyperammonemia and hepatic encephalopathy due to the underlying defective N metabolism and disrupted liver‐muscle axis. We designed AXA1665, a novel composition of AAs (ODLIVHKT), to address the above described metabolic dysregulation, and previously showed that muscle mass and function tended to improve in compensated and well‐nourished Child‐Pugh Class (CPC) A and B subjects (ILC 2019, LBP‐31). Here we examined the effects of AXA1665 and dietary protein on its ability to restore the dysregulated N and AA metabolism in these subjects.

METHODS: 23 subjects were studied in a 2‐Part study. In Part 1, subjects consumed a 35g protein shake (PRO); in Part 2 subjects underwent a 2‐period crossover design with an intervening 14‐day washout where subjects were orally administered AXA1665 (4.9g TID or 14.7g TID) or placebo (Pbo TID) for 15 days in each period. On d1 and d15 of each period, AXA1665/Pbo was administered 1h after PRO. Plasma was serially sampled for AAs and ammonia over 5h in both parts. Subjects were domiciled in a research unit to ensure standardization of meals (including a late evening snack) and physical activity.

RESULTS: AXA1665 dosing resulted in a pharmacokinetic profile distinct from that of PRO, and displayed supraphysiological levels of its constituent AAs (eg Leu, 4‐6x endogenous levels) necessary for proteogenesis that are not achieved by PRO alone. In contrast to PRO alone, AXA1665 over 15 days tended to lower the levels of non‐constituent endogenous AAs (eg Tyr AUC0‐5h ↓10%). Lowered ammonia likely reflects improved N handling by AXA1665 as supported by a 17‐22% increase in blood urea nitrogen (within normal range) without concomitant changes in creatinine on d15.

CONCLUSION: These findings suggest that AXA1665 promotes anabolic activity and ureagenesis to dampen ammoniagenesis, including enhanced clearance of specific aromatic AAs, which have been inversely related to cirrhosis‐related outcomes in prior published studies. These results support AXA1665 as a potential promising approach to mitigate the core metabolic impairments associated with cirrhosis and its complications, warranting additional studies