A novel, precision-engineered amino acid composition, AXA1665, is safe, well-tolerated and improves neurocognition and physical function in Child-Pugh A and B subjects.

Introduction: Overt hepatic encephalopathy (HE) involves systemic metabolic dysregulation, including amino acid (AA) imbalance, elevated ammonia, impaired muscle homeostasis, and cognitive dysfunction. Currently, there are limited interventions that comprehensively address these defects. AXA1665 is an investigational composition of 8 specific AAs that targets the multifactorial dysregulation associated with cirrhosis and HE.

Methods: AXA1665-002 was a randomized, placebo-controlled study to investigate the safety, tolerability and physiological impact of AXA1665 in Child-Pugh A and B subjects. After a 2-wk run-in, subjects were randomized 2:2:1 to receive either 29.4g (low) or 53.8g (high) of AXA1665 or placebo (Pbo) in 3 divided doses/day for 12-wks followed by 4-wks safety follow-up. Study assessed neurocognitive performance, muscle structure/function, markers of nitrogen metabolism, and safety/tolerability. 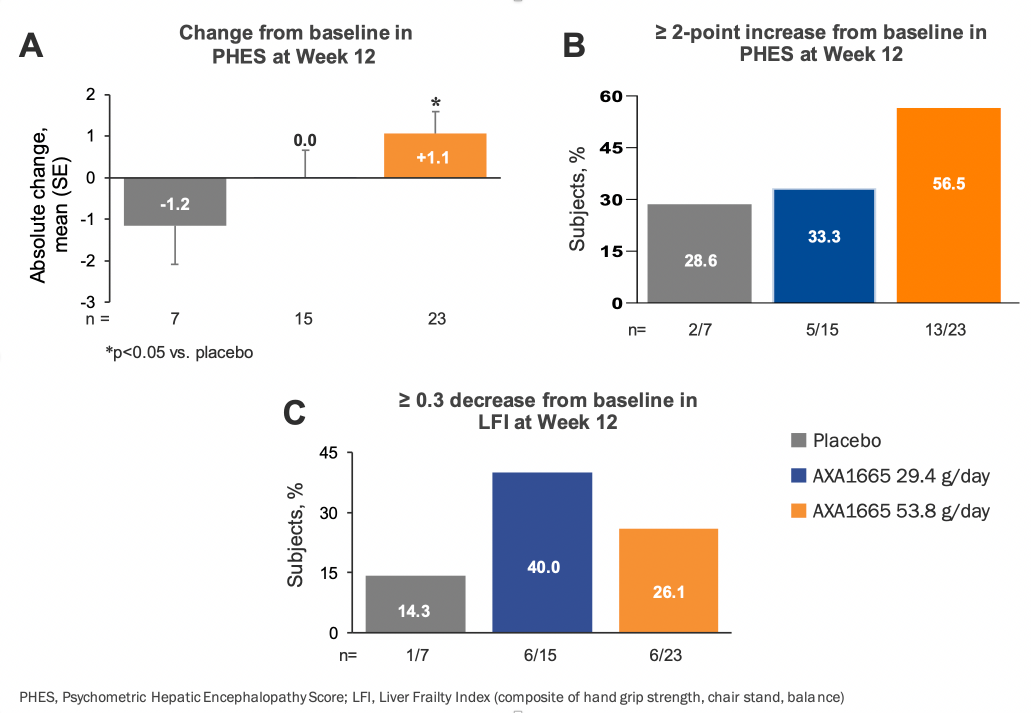 Conclusions: AXA1665 was well-tolerated, and induced clinically relevant improvements in neurocognition, physical function and nitrogen metabolism. These multitargeted and coordinated actions support the continued evaluation of AXA1665 as a potential novel treatment to address the complex metabolic dysregulation of cirrhosis-related complications such as overt HE and physical frailty.